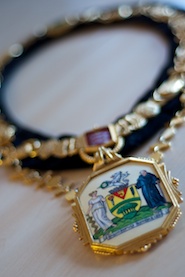 The Harrow chain was given to the former Harrow Urban District Council by Alderman C.E Brady O.B.E in 1942, who by chance was the first person to wear it when he was elected Chairman in 1943. He later adapted the gift, and it is now the Mayoral Chain for Harrow. The chain was made in Birmingham by Thomas Fattorini Limited, and is worn by the Mayor when attending official engagements.

The Mace is the symbol of the Mayor's authority and precedes the Mayor on ceremonial occasions and also at meetings of the full council.

Maces were originally weapons of war, used as clubs and bludgeons. However maces today are merely used ceremonially. The Bayeaux Tapestry on Harrow's mace clearly shows one being wielded by Bishop Odo of Bayeaux.

Harrow's mace was presented to the Borough in 1954 by the then local MP, Sir Albert Braithwaite D.S.O M.C M.P.

On appropriate civic or ceremonial occasions, the Mayor wears a scarlet robe made of superfine scarlet wool with a fur or fake fur trimming. This is based on a High Court Judges robe. The robes are worn with a lace jabot (like a cravat) at the neck, lace cuffs may also be worn and white cotton gloves. 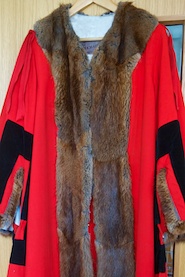 The same robes are worn whether the Mayor is male or female, however in addition:

The cockade is always worn to the right-hand side.