Lest we forget: A tribute to our fallen heroes 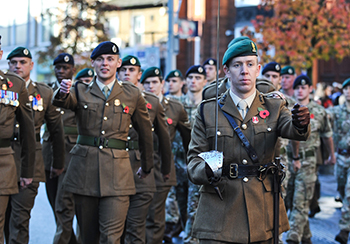 We will remember them on 10 November

Harrow will fall silent on Remembrance Sunday as hundreds of people pay their respects to the members of the armed forces who lost their lives fighting for their country - and our freedoms.

A poignant parade and service (the second largest in London) will take place at the Civic Centre on Sunday, November 10 - and everyone is welcome to attend. As always, we invite former servicemen and women – or their relatives - to wear their medals and take part.

The parade starts at Harrow Town Centre near Katie’s Statue and will march towards the Civic Centre from 10am.

“Please do join us to mark Remembrance Day and wear your poppy with pride to pay tribute to those who gave their lives for your tomorrow.

“This is about everyone in the borough coming together from all walks of life to remember. We also think of all of those affected by current conflicts.”

The annual parade is led by the Glen Trew Pipe Band - the second largest in London, after the Cenotaph